I have been running a daily report on the FOAM Map. It has been useful to find challenges to vote on and get a feel for the map activity. Do you want the same information?

Subscribe to the FOAM daily digest. You will start receiving emails with the previous day’s activity on the map:

Here is an archive issue. 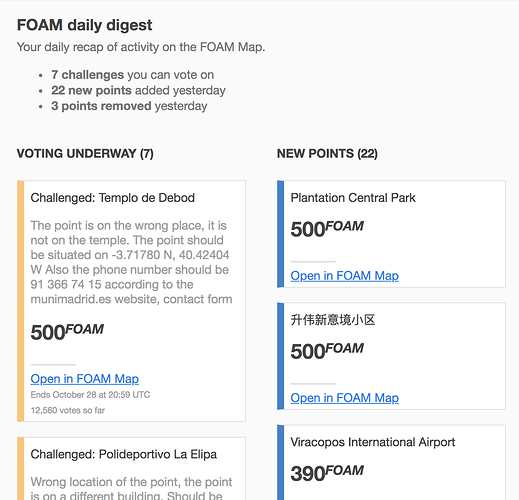 New editions of the daily email will now include the vote reveal process. Check out this preview 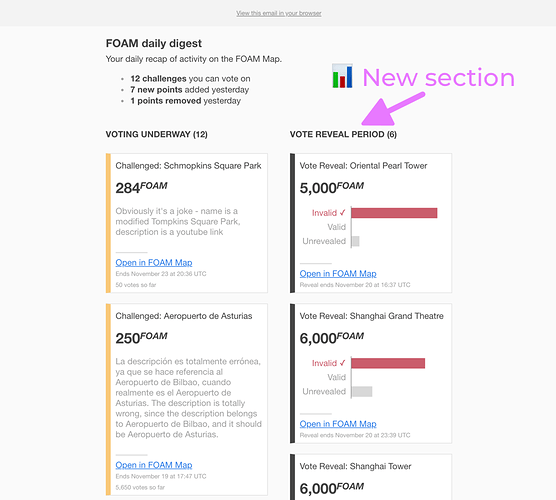 This is a great service! Thanks for providing it to the community.

Is there any plans to support subscribing to notifications for a specific point?

Thanks. You can subscribe to alerts for individual points using this Google form. This report also runs daily, at the same time as the summary email.

Wow amazing thanks! Will be super useful once more token holders come in and there may be an uptick in challenges

Great tool! I only wish it included postal address (at least up to city/country), so I could easier focus on things happening in my areas of interest.

Thanks for the suggestion. I’ve been able to implement it in a test version today, so you should start seeing the addresses for new points starting tomorrow. Here’s a preview 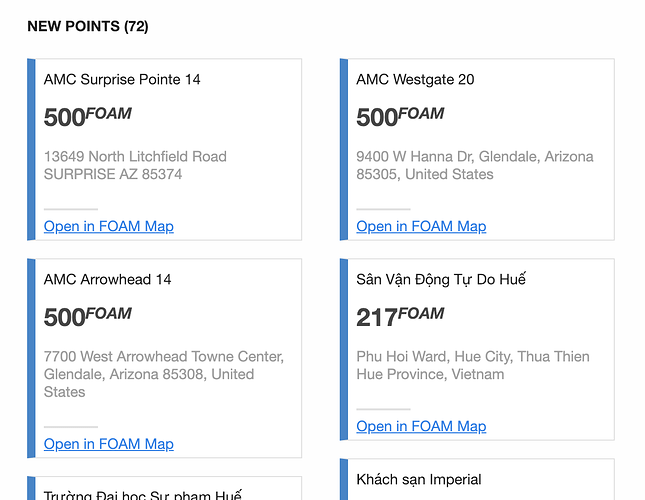 Separately, would you be interested in a version that is filtered to your local map activity only, or is seeing all map activity important to you?

would you be interested in a version that is filtered

I guess I’m interested in all activity, but I watch some areas much more closely and the rest as time permits.

There has been so much map activity that some email clients cut off the email due to its size. We took this opportunity to make a few changes. Check out the new format

Finally, I am interested in translating the email. If you would like to see your language covered and you can help translate content, please PM me.

Interesting to see that there are over 200 challenges that timed out, but haven’t been finalized. You’d think challengers and voters would have the incentive to update them to unlock the rewards, but it doesn’t always happen.

This stat shows all challenges regardless of outcome, including active and completed challenges. I think the amount of challenges & outcomes are approaching the point it will make sense to do a deep dive and see what’s happening.

For example, recently there have been successful challenges that do not remove the point from the map. In theory, these points should be challenged again!

LOVE these updates - thank you for your service to the community.

I like that number of points removed was “removed” from the subject line. Was unclear;ear which were deletions or challenges. Like the + - section a ton! Great work.

Agree, there is much to dig into the challenges as well as the Map post PoU - being a leading protocol in curation markets. I have been following the telegram and gitter for TCRs and Curation Markets and FOAM is at the forefront of this cool experimentation

Why is there very few carographers and POI added daily ?

Does the FOAM team has a strategy in place for acquisition and retention ?

Streetcred is killing it with their approach. They already have dozen of thousands of POI added…

Of course one might argue that their incentive model is different and not sustainable and that is likely to be true but however their go to market strategy is powerful and very well thought out to bootstrap their map and also understand the user behavior. It is impossible to build an incentive model that works before anyone uses the product, because how users use the product will always be different, that’s why there are loops to collect feedback and iterate on the product until product/market fit. I like FOAM team but it’s interesting to note that Streetcred has an approach much more focused on the users behaviors and understanding the user, I like it because they seem to understand that it’s all about the users and usage. These guys are not amateurs, they know how to find product/market fit and grow things.

Curious to see what you guys think about that. Maybe opening another thread would be better for discussing this topic.

I am going to take a stab at answering this, because I am confused about where you are coming from.

The simplest answer on why there are few Cartographers is likely the same reason why there are very little markets being made on Augur, videos being streamed on Livepeer and users of DEX protocols like 0x.

What is most important to keep in mind though is that these are not Web 2.0 products seeking conventional “product market fits”. That is not what an open protocol does, including FOAM.

To be a Cartographer at this stake is to be a pioneer on the frontier of the cutting edge. Not many are suited for this. Only 1000 people participated in the FOAM sale and seems many are holding and not necessarily using it. With the market downturn, the reality is that the ratio to speculators and those truly wanting to build Web 3.0 is very skewed.

That said, the basic mechanism of the FOAM Map TCR works and from my understanding not only was it tested through an initial use period with features added throughout the smart contracts themselves launched by FOAM have an upgrade functionality. In practice this means this is a 1.0 release and there will in fact be iterations based on learnings. This can mean architecturally to the contracts but also in incentive models.

The point of an open protocol like FOAM is that an ecosystem of services and applications, some which may require a “product market fit” can hook into and build on top of.

Caleb’s newsletter is a first great example of this occurring as well as the NFT game. It is completely open for anyone to build on. What are you doing to improve and grow FOAM is the needed mindset.

All of the material I have read puts emphasis on grassroots community. Not happy with the model or incentives? That means you can make a proposal. Critiques only go so far without valued follow up proposals.

To the point that “Streetcred is killing it with their approach. They already have dozen of thousands of POI added…”

I never heard of Streetcred but after doing some research I could not disagree more and the emphasis you are putting on product market fit sounds very Web 2.0. This is not surprising because it turns out Streetcred does not use blockchain technology! There is no Web 3.0 or tech stack being used. There is not one blockchain developer on their team They are simply paying beta testers with investor money.

This is like Earn.com and is more a competitor to the much more fleshed out Foursquare Swarm or even Google Maps.

More so, I looked at their map that you say has dozens of thousands of POI and guess what? All of them have blank descriptions. Users are simply adding as many low quality points as possible to compete for money. 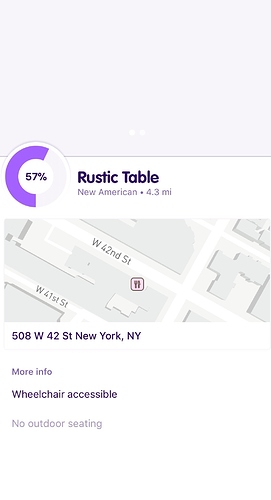 Compare that to the detail and time FOAM Cartographers put into their points. Quality is more important than Quantity.

I like FOAM team but it’s interesting to note that Streetcred has an approach much more focused on the users behaviors and understanding the user, I like it because they seem to understand that it’s all about the users and usage.

I would argue this is the case for FOAM too but specifically on a web3.0 user. Streetcred can target the masses because it is not a blockchain application and has almost nothing to do with blockchain technology. FOAM had a private and public beta, built a spatial stack and has been very involved in the Curation Markets communities.

I also found both companies gave talks at the Open Street Map Conference.

The model sounds completely unsustainable and not much to do with blockchains. 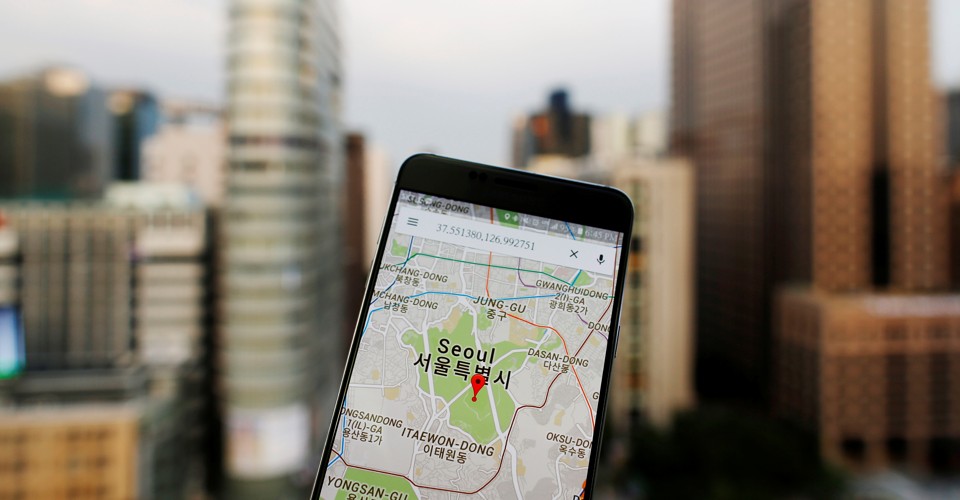 Streetcred, a new open-source mapping startup, will pay you to map. (And then give the data away for free.)

“To pay the mappers, the startup hopes to get data-hungry companies—think Uber, Apple, or Niantic, the augmented-reality developer that built Pokémon Go—to “sponsor” particular regions or industries that aren’t as well-mapped by other services”

It remains to be seen, Nagaraj said, if businesses will be willing to pay Streetcred contributors to collect data that will eventually be free and open for everyone—including their competitors—to use.

Another question is what type of mapmaker such a model would attract, Nagaraj said. Currently, there’s no shortage of crowdsourced efforts for the cartographically inclined to get behind. Volunteer mappers can devote their hours to drawing street vectors on Open Street Map, flagging traffic jams on Waze, tracing bus routes on Moovit, or photographing street views for Mapillary.

All of these platforms have large communities of altruistically motivated contributors, working for no real recompense but the pleasures of knowledge creation. There’s something lopsided about that, since the companies who own or license these maps make money off that free labor. But it’s not always helpful to introduce money into volunteer projects, Nagaraj said, pointing to a famous study that found paying people to give blood turned out fewer donations than encouraging people to do it for moral reasons. With Streetcred’s mapping model, “you might turn out more mercenary types who aren’t inherently motivated,” he said.

I never heard of Streetcred but after doing some research I could not disagree more and the emphasis you are putting on product market fit sounds very Web 2.0. This is not surprising because it turns out Streetcred does not use blockchain technology!

Thank you for your detailed write up on the topic! It is refreshing to see someone do this much research. I agree that simply paying users to populate a dataset with low-value data is not supportive of a broader ecosystem. I look at the POI process in FOAM and can see it has a much greater potential to reward people that curate and tend the information!

Since this thread is hijacked anyway

The Curation part of TCR seems to work quite well for FOAM, judging by all the low-quality POIs being weeded out on a daily basis. It would be nice, of course, to strengthen incentives for the registration of new POIs. Proof of Use played out pretty well, but what’s next? I don’t know. Can Proof of Use be enforced for every new Ethereum address that receives and wants to transfer FOAM? Can be problematic with contract addresses, like Uniswap.

The curation has been working well, which has been fun to watch. There’s some risk in losing the direct incentive to challenge and vote on points as network transaction costs exceed FOAM token incentives.

Small update. From today, the “Open FOAM Map” links will take you directly to the relevant place on the map, instead of loading New York City by default.