Hi All!
My name is Marcus, I run Gatekeeper Network. Our goal is to create a hardware-agnostic operating system that brings trustless computing and scalable Ethereum technology to create self-sovereign IoT devices.

We are very happy to be building out, and introducing FOAM Party in collaboration with the FOAM grants program. This project is admittedly a bit “different” than some of the things you may be used to. We think FOAM Party explores some really cool dynamics of what can be done with FOAM while helping further the underlying protocol technology.
This post is going to try and cover what FOAM Party is. We will do our best to follow up questions. Note that some of the details in the documents have changed and will be in flux a bit during development.

What IS FOAM Party?

So from the top then, FOAM Party is a geolocation-based game that uses some pretty sick custom autonomous IoT hardware, called Totems to play the world’s first decentralized verifiable presence game. “Totems”- as in the widgets from the movie Inception that are the arbitrators of reality and dream. In our case, Totems are the arbitrators between the blockchain/FOAM protocol and physical geospatial location.

that players will physically find, capture, move and lock around publically accessible locations within randomly selected FOAM Signals.
We know this sounds like a lot to imagine so we built an early interactive AR render of the Totem you can play within your web browser right here:

Players download the FOAM Party App inside of the Alice SDK on their mobile device to interact with Totems in real life and play FOAM Party!

FOAM Party is a domination-type capture the flag

game that takes place in real life, using IoT devices that are connected autonomously to the FOAM protocol. Think along the lines of Pokemon Go; instead of catching virtual Pokemon and spoofing GPS location; players will use their phones to interact with: capture, unlock, move and relock physical Totems around public locations. Players can only interact with totems by being physically near them, and we generate a cryptographic proof of this that serves to progress game actions inside of the FOAM Party Smart Contract logic.

For the nerds in the room

, we have a lot more hardware/software implementation information in the abbreviated proposal:

Some key points on how this benefits the FOAM Protocol & Community

So… where’s the party

We’re planning to deploy the first season of FOAM Party around midtown Manhattan. Possibly Brooklyn. In the future, we want to make these as location agnostic as possible, but for the inaugural games, it is important for game mechanics to play in a place with a lot of FOAM POI Signals.

And lastly, some sizzle shots of a PoC Totem mockup and its innards with banana for scale 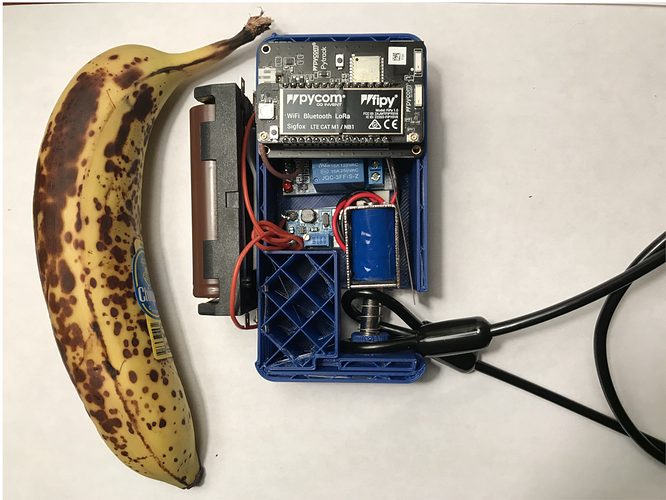 Thank You All,
Marcus

great write up Marcus. glad to have you here. from the DAO all the way to FOAM, im finally gonna get to mess with some smart locks it looks like lol.

Thanks for sharing @gatekeeper
FOAM party is very interesting because it opens a lot of possibilities in gaming. I love the technology aspect of your project.

That being said, to be honest and constructive in my feedback, it looks like a headache for the user to understand the game. A 12 page instruction manual to understand how to play is a lot of effort to ask. I also think that you are building more than the MVP required for the minimal gaming experience needed to iterate on with feedback loops, I say that because it appears that there are a lot of “features” or “rules” nor required for a v1. The v1 goal shouldn’t be to have the full experience you have in mind (with all the friction that comes with it and decisions made without feedback) but the minimal experience to “wow” the user and hook him.

@cartocrypto Thank you for the feedback. I know you guys like details so that’s the instruction manual and proposal with the best version our team could ideate. Of course, with the caveat from the original post, “… some of the details in the documents have changed and will be in flux a bit during development”. In congruence with your statement about requirements for an MVP / v1; I agree, and to be clear we are not putting the cart before the horse when developing. Instead, we are focusing on the core functionality that benefits FOAM protocol as a whole ie. embedded radios, hardware, BLE App integration etc. before focusing on details like final gameplay variables. Cheers

@gatekeeper whats the optimal number of players for the beginning areas of the game?