Possibly useful challenges, pointing out what could be imperfect pin locations:

Challenges based on blatant lies with a pinch of nitpickery:

Voted on them all. I dont think those type of slight challenges should pass at all imo.

I suspect that this challenger(s) is throwing around a lot of weight in FOAM tokens in voting for their challenges.

If you feel strongly for/against these challenges, you may want to make your voting contribution as high as possible (ex. tens of thousands of FOAM).

Am I missing something, or is that not the challenger’s address?

I would like to add The Graduate, a dive bar in Berkeley, as a point with voting underway where the challenge seems suspicious. Full disclosure, this is my POI, but the bar has no official website, and the POI is definitely in the correct location.

@foamspacer I missed voting on some of these and they are in the reveal stage now.

Any new challenges we should be paying attention to?

@Jimmy_maps, it’s the usual suspects, challenges at 1000 and above:

Voting period ending in less than a day.

Thanks. All from the same challenger?

Possibly useful challenges, pointing out what could be imperfect pin locations:

Challenges based on blatant lies with a pinch of nitpickery:

Let’s see how they all turned out aye 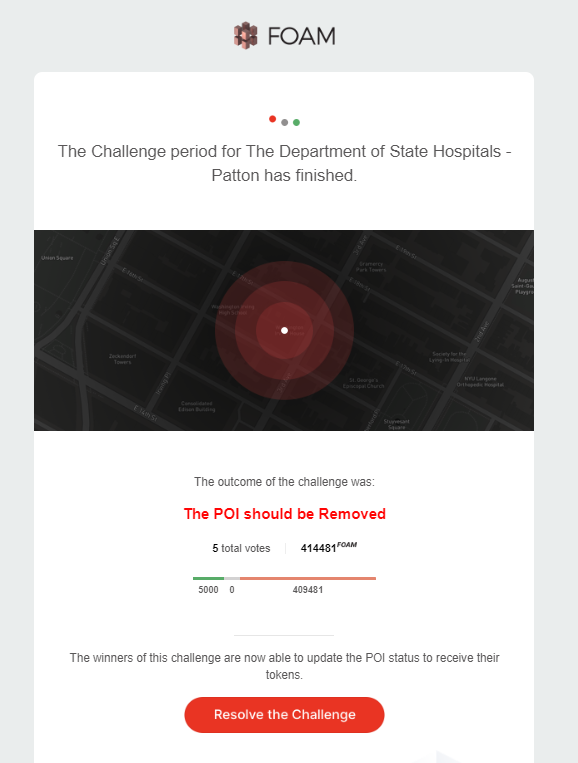 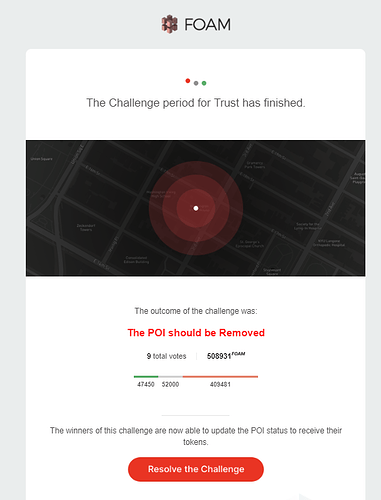 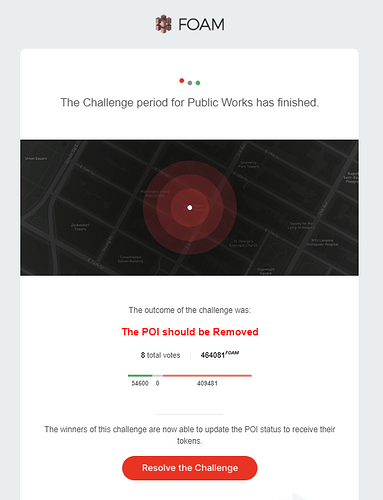 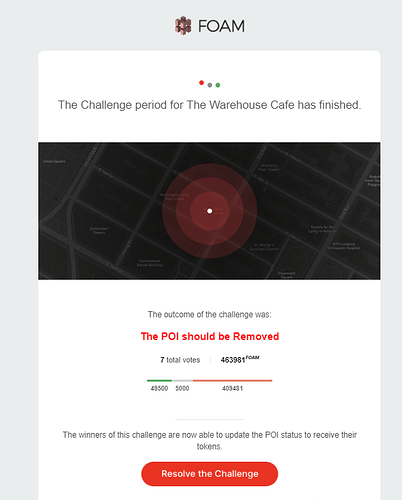 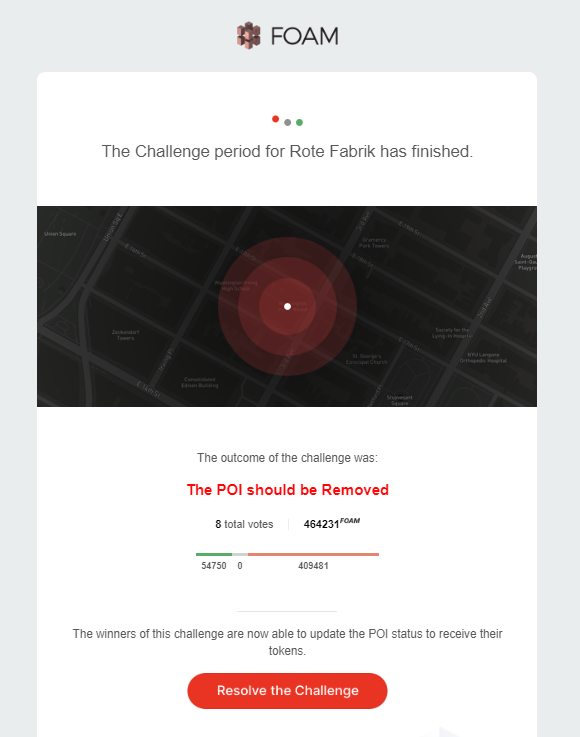 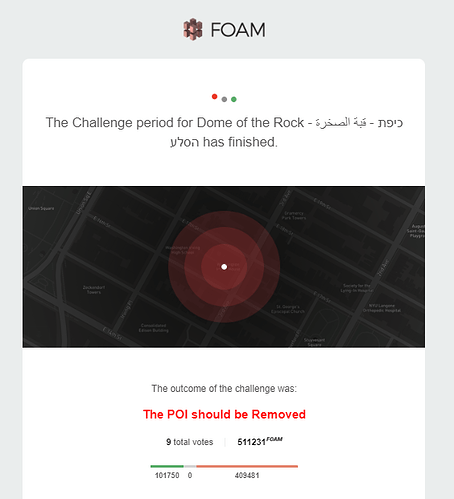 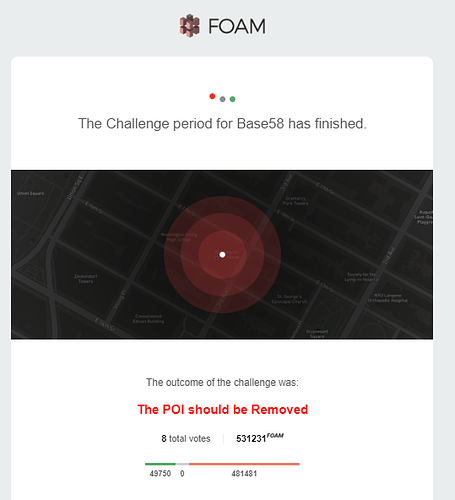 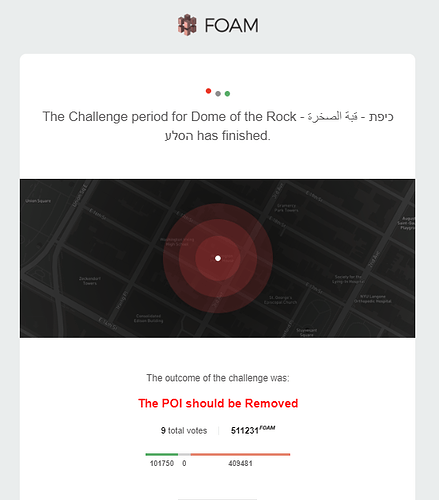 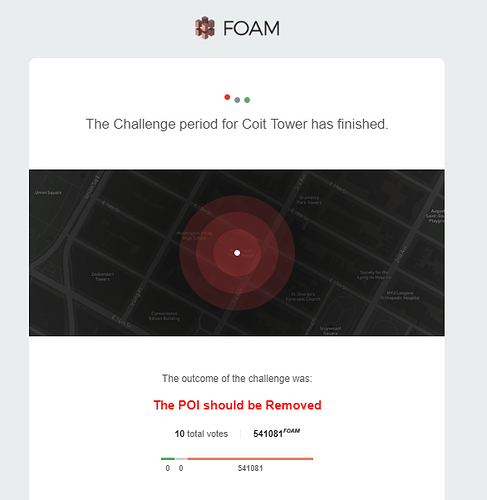 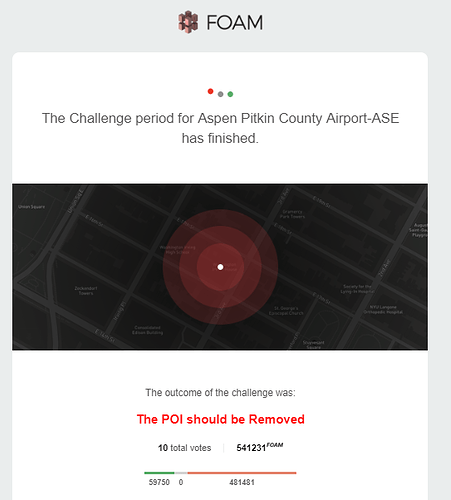 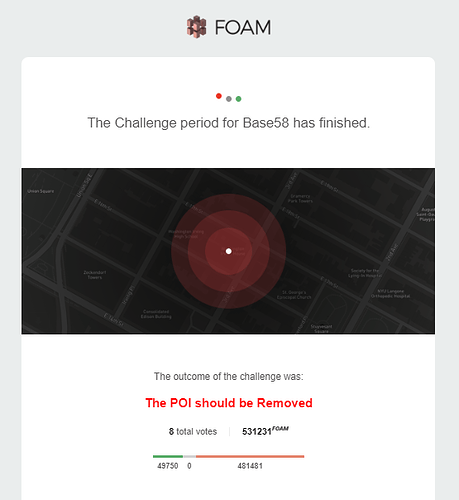 Or if you prefer in a table format

They were all removed

Are those outcomes acceptable? If the removal of those POIs was not the expected outcome, that means the challenger has overwhelming force …

This is a little sad. I personally voted deny for the Coit Tower because of the obvious misplacement, but approve for many of the others.

Kezar Bar has also been removed from the map … 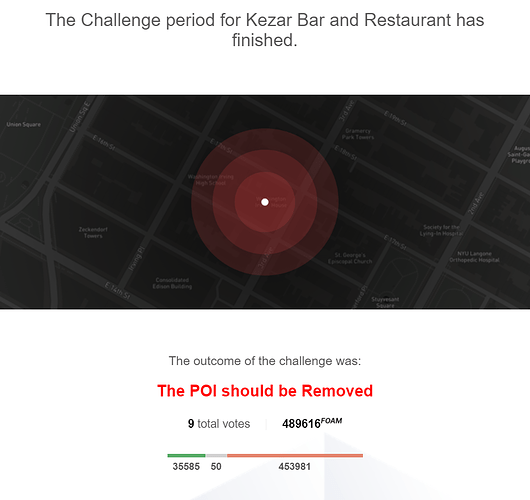 Yeah, this is kinda sad. The challenger is voting with a huge order of magnitude. As you can see, with this # of tokens each time: 409,481
At this rate, it looks like i will probably lose all the other points i’ve made that this person is challenging.

It’s a couple hundred bucks, which is I guess enough to make this worth it for them. But the malicious actor will only get more powerful. I agree that this is a good stress test for the map, but I think some of the challenges of voting (commit-reveal, no clear incentive yet financially to stake to a POI, confusing things around voting rules (like, how much you can vote with repeatedly) make it hard to say it’s a productive stress-test at this time.

Anyway, clearly this person has 409481 FOAM and now significantly more at their disposal.
The most “keep” votes on any of these are 100,000. I have three ideas:

I’m bummed, not because I lost the challenge, but because afaik there’s no way we could have won and the map is being played maliciously.

EDIT: one other thing i guess that the challenger is doing which is beneficial, is getting me to come to the FOAM map and participate

EDIT #2: I saw @Ryan_foam mentioned in another thread that a new UI for cartographers is coming mid-may. Perhaps this will help, as it seems we’d be able to better track malicious actors?

I hope so at least!

@ainsleysutherland Sorry you are feeling bummed and thanks for sharing your feedback and suggestions. The curator dashboard tools will be launching in Mid-May. A preview was shown on the recent Community Workshop Call. The recording will be posted shortly.

It would be great to have you join the next one and or contribute these suggestions to the improvement proposal documents.

[image] To all FOAM Cartographers, Please join us for first Community Workshop (Thursday, April 25th at 12.00pm EST). For next week, we have planned a special community workshop with the intent of discussing community proposals for improving the FOAM Map. The workshop will go over previously collected improvement proposals, the current state of the FOAM Map and will end with a discussion surrounding a more formalized future framework for FOAM improvement proposals. The workshop will not be l…

Will add that this has been discussed on the forum, but at the moment there is little benefit to staking large amounts of FOAM in your point over the minimum- the trend is this creates a target for challengers and those tokens are likely better served in the voting contract. It is the Cartographers responsibility monitor their points and to withdraw and or boost their stake as they see fit. That said, there are a ton of fantastic community improvements have been proposed; looking forward to the conversation continuing!

Thanks @Ryan_foam for the suggestion-- I’ve now reduced my remaining POIs to 50 FOAM.

Unfortunately, two had already been challenged, again under what I can only understand to be false pretenses (whole foods and berkeley bowl). I’ve moved whatever I had in POI to voting, but it’s not 400K worth

Hopefully I can make it to the next call!

The reasons commonly stated for commit-reveal are vote-memeing and bribery. Do we have any evidence that those patterns exist and/or are worse than the current status? 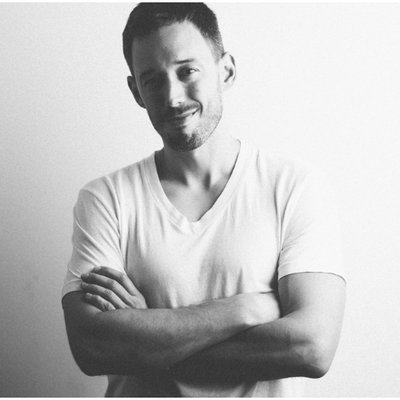 @iurimatias My understanding is also that a single 800k vote whale (single-handedly accounting for more than 60% of the rebalanced vote weight) swayed the vote right at the end. Perhaps it’s a win for plutocracy and a defeat of on chain voting? 🤔

Look at the recent Aragon votes. They do not use commit or reveal, so you can see how the vote is going before it ends. With their recent vote some whale came in at the end knowing how their weight would effect the outcome. It is well known on chain voting all together is an up hill battle. I am interested in Quadratic Voting as @nameloceroom brought up. This too:

Thanks for the link, @Jimmy_maps. I believe even TCRs have a similar challenge (perhaps somewhat mitigated by not knowing the direction of the vote). But if the total vote weight is 40K and I have 400K, then I as well know i’m going to sway the vote.

I completely agree re: on-chain voting. I’m likewise looking forward to other tools like quadratic voting.